I came to the Halo novels at the tail-end of my interest in tie-in fiction. I hadn’t picked up a Star Trek book in years and the last Star Wars book I read was Karen Traviss’ Triple Zero. I started with Eric Nylund’s work from The Fall of Reach to Ghosts of Onyx (with William C. Dietz’s The Flood stuck in there). Based on those, I figured I could happily go without reading another tie-in novel ever again.

Then 343 Industries, the Microsoft subsidiary that took responsibility for all things Halo from the game series’ original developers, Bungie, surprised the heck out of me: Not only did they get the very capable Karen Traviss on board for a Halo series, but they also employed the talents of award-winning writer of cosmic-scale SF, Greg Bear, to tell the secret history of the Halo mythos’ ancient, vanished builders of the very Halos themselves – the Forerunners.

And damned if he hasn’t un-done the damage that Nylund and Dietz did to my interest in reading Halo fiction.

What sold me on the original Halo: Combat Evolved back in the day was a review that described it as the chance to star in your own science fiction action movie. And the reviewer was right; it was a very well designed and polished game whose narrative traded on broadly-drawn characters uncovering an ancient mystery whilst facing extinction at the hands of ruthless enemies. The two most notable characters were the ultra-competent and wryly humourous Master Chief and the chatty, witty and clever Cortana.

Yet when Nylund wrote both of those characters, he didn’t include even a hint of the lighter side of their personalities. Instead, the Chief, Cortana and every other character we met in those books was either completely grim and serious (not to mention prone to speechifying) or an utter jerk. Admittedly, The Fall of Reach was dealing with the darker side of Humanity’s history in the Halo universe (specifically, the kidnapping of six-year-old kids and turning them into super soldiers), yet the trend continued throughout First Strike and even Ghosts of Onyx. That ongoing absence of the character I knew in the characters Nylund wrote was the source of my frustration, and as I couldn’t really give a shit about them or anyone else, I found Hylund’s execution of subject matter with a heap of inherent excitement… dull.

Maybe Cryptum not dealing with the core Halo fiction characters in any way lets it be a bit more free with its narrative. Heck, long-time followers of the deeper Halo fiction, especially the Terminals in the game Halo 3, may find the book’s timeline contradictory and confusing. In a way, it seems as though Greg Bear pulled a “Midichlorians,” i.e. messed with an existing part of the fiction for minimal practical effect. Instead, though, the inconsistencies serve only to deepen a book laden with mystery – and, in the end, all make sense.

It’s that sense of mystery that plays into the book’s epic feel. In a recent podcast, the guys at Writing Excuses managed to define what makes a story epic – it isn’t just the description of grand landscapes and deep characters, it’s that the story literally changes the map of its world by the time it’s done. Statuses quo are rent asunder, governments fall, civilisations topple. And while, like the Prequel Trilogy in Star Wars (and the fall of the planet Reach in the game Halo: Reach), we know that things are going to end badly, Bear takes a different tack by playing with readers’ expectations as to just how the Forerunners went from galaxy-spanning power to dust, especially in terms of the history of the Flood (and Humanity).

But the real reason why Cryptum works so much better than every other Halo novel I’ve read is because Bear presents the tale of the fall of the Forerunners through the eyes of one of their own and in doing so makes them real. 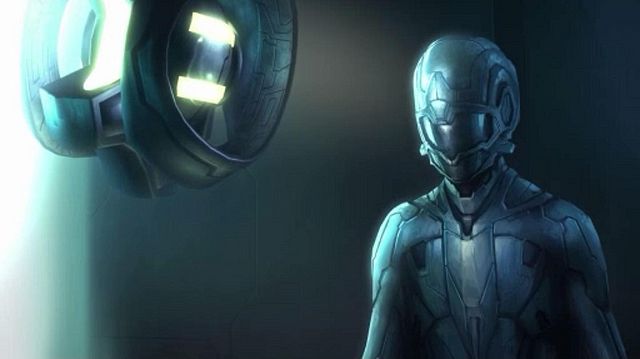 The novel is the record of a young member of the Manipular caste named Bornstellar, yet to undergo his first mutation, a process by which Forerunners inherit the genetic structures and knowledge of their forebears.

Bornstellar’s impetuousness and disdain for Forerunner society has seen him exiled to a Miner caste family on what we soon realise is Mars. Bored by Forerunner society, Bornstellar is obsessed with uncovering ancient technology left behind by the mysterious race from whom the Forerunners inherited the Mantle of protecting all life in the galaxy.

Seeking this treasure, he stows away on a transport to ancient Earth, a world that he soon discovers is under the protection of a legendary Lifeshaper known as the Librarian. He grudgingly accepts the aid of two humans, whom he sees as beneath him, who bring Bornstellar to an ultra-high-tech version of the trap-laden tombs Indiana Jones has been known to brave. But the treasure Bornstellar uncovers isn’t what he’d hoped. Instead, it’s the slumbering-place of the Didact, an ancient Forerunner warrior who went into an exile of hibernation over a thousand years ago.

From that moment on, Bornstellar is swept up in the unfolding of machinations that commenced tens of millennia past, and after his choice to awaken the Didact, he is faced with one that will determine his very fate: to accept the Didact’s genetic imprint and wisdom as the template of his first mutation. How will the choice change him?

It’s an irony that in a series whose core works are dominated by action, Bornstellar doesn’t participate in a single fight scene during Cryptum. In fact, he’s along almost as an unwitting observer. It’s a testament to Bear’s skill as a writer that even as a mostly passive participant, Bornstellar is just as interesting as the Didact, if not more so. The trick, I think, is that Bear knows how to reveal more about his characters’ personalities over time.

As Bornstellar spends time in the Didact’s presence, the ancient warrior goes from a forbidding, grim presence to a tortured soul who not only respects his former enemies but even seeks some absolution for what he did to them. Bornstellar himself grows from a self-absorbed and arrogant juvenile to a being who accepts the choices he makes even though he has no idea of their consequences – and even finds more kinship in the two humans swept up in the Librarian’s plots than his insular, status-obsessed kin. And Bear knows when to lighten the mood right when it’s needed, too; not only are the two humans good foils for the Forerunners, but even the Didact demonstrates a wry appreciation of his circumstances.

In telling a story about a vanished race of star-striding superbeings, Greg Bear manages to do what the writers of the books about the games’ human heroes didn’t do – make his characters human. Halo fans probably own a copy already, but if you like your science fiction both deep and entertaining, make sure you put some of your cash toward Halo: Cryptum.

About time, too. Bring on Halo: Primordium!

What’s your favourite tie-in novel, i.e. a novel that expands on another fictional franchise?

Have you read any of the Halo novels? If so, which is your favourite and why?

Which tie-in novel (or novels) for any brand of fiction (not just Halo)  don’t you like? What turned you off it/them?

Related posts brought to you by YARPP.